Why babies throw food on the ground...and what to do about it!

You make a delicious looking meal, you sit down to eat it with your lovely baby, and splat! She throws half-or all- of it on the floor. This is a very frustrating but common issue (especially with 10-18 month olds).

There are really a few reasons babies/toddlers throw food:

1. They are just experimenting with gravity and cause/effect- "It's so fun to watch food fall and see what happens when it hit the floor."

2. They are interested in the response it elicits from you- "Yay! Mama gasped then jumped up!" or "Wow, I got a bunch of new stuff when I did that!"

3. They are not hungry/are done with the meal- "I'm bored and full, I don't want this food in front of me anymore."

4. They don't like that food- "Maybe if I throw this stuff on the flood, I'll get the crackers I wanted."

5. They are frustrated about something to do with the food- "This is just too hard to eat" or "I can't figure out how to pick this up."

Sometimes it's a combo of a few of these reasons. For all of these scenarios, the initial response will be the same: a firm redirection "food stays on the table" or a simple "no." However, the secondary response kind of depends on why the child is doing it.

If it's #1 or 2, I suggest saying the "no" or the line about food staying on the table, then ignore. If they throw the food again, I'd ask if they are "all done" and let them know you won't allow them to do that: "if you throw food again you're all done." If they throw again, meal ends. You can also have them help you clean it up at that point but you must be firm on meal being all done. No snacks after, no bottle or cup of milk right after, no walking around with food in their hands- just done.

If it's more like #3 or 4, I'd still go through the routine I just mentioned but I'd also do a few other things. - consider how often you're providing snacks throughout the day and possibly cut back, especially right around mealtimes. We tend to over-snack our kids and often that decreases their hunger motivation at mealtimes. Some kids do fine eating every 2-3 hours, some eat best when fed every 3-4 hours.

- start with less food on the plate/tray so they don't have lots of extra to throw. It's probably better for them to ask for more than have an abundance to toss around.

- if you suspect they are throwing because they don't like the food, remind them that "this is what we are eating at this meal and there are no other options.

If it continues, stop the meal, clear the food, and don't offer any other foods until the next meal. You want to help them understand that they can't order up new foods from you by throwing what you already offered them on the floor.

If it's more likely #5, start with the "no" line, then see if your babe just needs help. Sometimes my daughter pushes the food off the table when she's frustrated that she can't easily pick it up or she keeps spilling it or it's too resistive for her to chew. In all of those instances, if I help her pick it up to feed herself or I break the food up a bit or dip the resistive food in a sauce to soften it, often that's all it takes for her to continue happily eating.

Remember, the more fuss you make over it, generally the more power it gives the behavior. The behavior will pass sooner than you think! 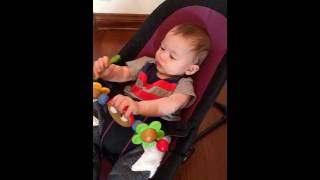 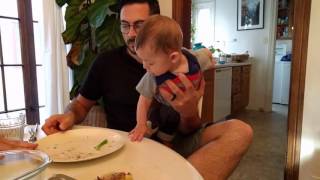